How to Vote on a KILT Referendum Print

How to Vote on a KILT Referendum

On 10 November 2021, KILT reached the final phase of decentralization. Until that day, any changes to the KILT blockchain could be made using the Sudo key which was under control of BOTLabs GmbH, the entity that initially developed KILT Protocol. This Sudo module allowed KILT’s developers to initiate staking and introduce governance and a Treasury. Once these were tested, KILT functionalities such as Decentralised Identifiers (DIDs) and Verifiable Credentials were added.

The KILT blockchain has been audited and is running as planned, so the Sudo key was removed. Governance of KILT Protocol now belongs to the community of KILT Coin holders, who has the power to decide on the future of the network.

This decision-making power comes with responsibility. To encourage active participation in the democracy of the network, we have prepared this step-by-step guide to help you fully understand and use your vote.

Casting a Vote on Polkadot.JS

If you wish to increase your voting power by selecting a period of time to lock your coins, click the arrow next to conviction (2). Choose your conviction in the drop-down menu.

Please note: if the referendum is successful, your coins will remain locked for this period; if unsuccessful, your tokens will be unlocked when the referendum has finished. Also because voting happens transparently on-chain, it requires a small transaction fee (around 0.017 KILT). Locked tokens or tokens used for staking can be simultaneously used for voting, but a usable, unlocked balance to cover this fee is required.

Like Polkadot and Kusama, KILT Protocol has conviction voting. This means if you feel very strongly about a proposal, you can lock up tokens for longer periods to increase your voting power up to a maximum factor of 6. The longer you lock your tokens, the stronger your vote will be weighted.

The times range from no lockup to a period of around 224 days, with the lockup time beginning after the voting period ends. Tokens used for voting will always be locked until the end of the voting period, no matter what conviction you vote with.

Of note: the lock time is based on the standard blocktime of 12 seconds per block and hence may vary due to differences in the real blocktime. 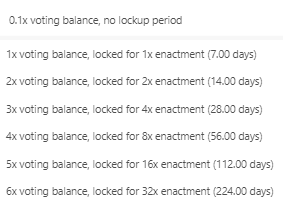 If you choose not to lock any tokens, your vote only counts as 10% of the tokens that you commit to the voting (vote value), while the maximum lock up of around 224 days means you can make your vote count for 600% of the vote value. You can choose to lock all or some of your coins for any range between 0.1x and 6x, with a lockup time as outlined above.

For example: You have a wallet with 21 KILT Coins. This could include staked or vested coins.

● You want to vote but don’t want to lock any coins.

● This gives you a voting power of 2 KILT Coins.

● Note that all your 20 coins are locked for the time of the voting period (7 days).

● You strongly believe in the referendum and want to vote with your full balance and maximum conviction.

Of note: rounded numbers are used as an example only – make sure that you always leave enough free, usable balance to cover the transaction fees.

Conviction voting allows users with a small amount of tokens to increase their voting power, and deters a token holder from creating and voting on a malicious proposal and then leaving the network.

KILT also uses an algorithm to adapt the amount of “aye” (yes/agree) votes needed to pass depending on voter turnout: the greater the number of voters, the lower the threshold required to pass. Therefore, when voter turnout is low a supermajority is generally required; with a high turnout a simple majority is sufficient.

Before voting on any referendum, you can read more about it and join the discussion in Polkassembly (under “On-chain” → “Referenda”). Polkassembly is an open source platform for providing information, context and a discussion forum for proposals and referenda in the Polkadot ecosystem.

1. Go to KILT Spiritnet on Polkadot.JS 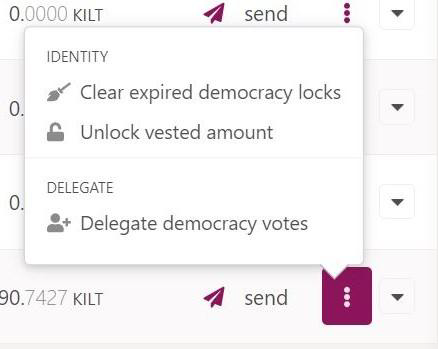 Confirm the transaction. This will clear the lock.

Thanks for participating in the governance of KILT Protocol!

Did you find it helpful? Yes No

Send feedback
Sorry we couldn't be helpful. Help us improve this article with your feedback.